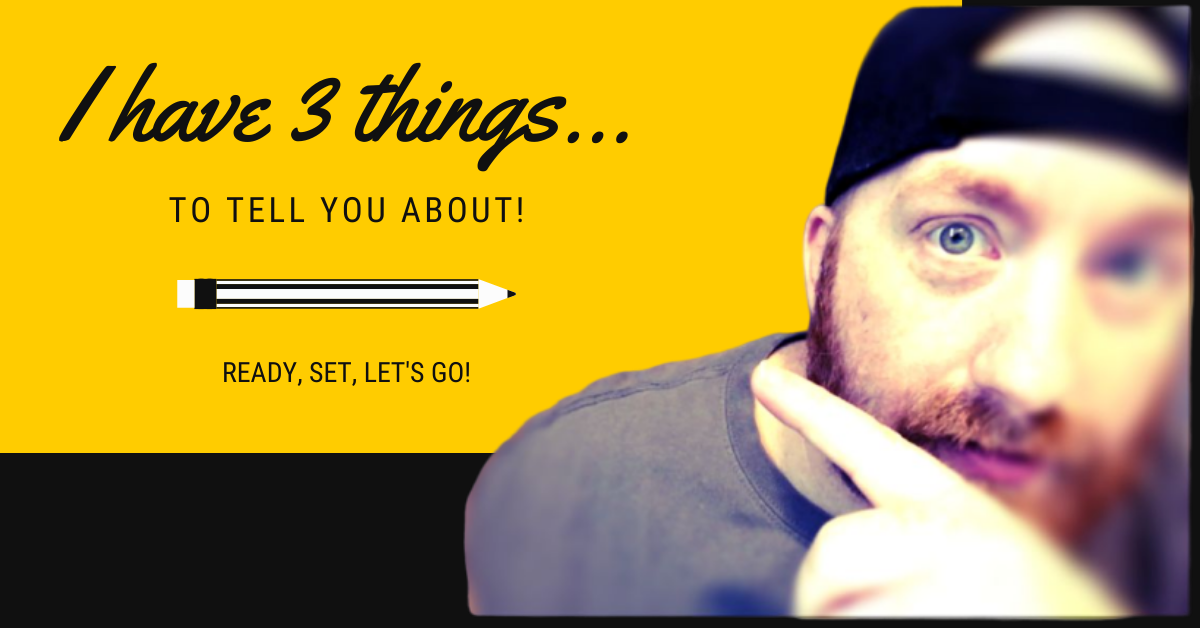 I have 3 things to tell you about…

I hope your weekend was awesome!  Mine was pretty sweet. One thing I did was watch this crazy movie called “The Mandela Effect” with my son.

It’s basically about this guy who’s daughter dies in an accident at the beach.  As he and his wife are trying to recover from the horrific loss he starts to notice weird things all around him.

What kind of weird things you might ask?  Well I’ll tell you…

Famous movie quotes, not like he remembers, spellings of words wrong, pictures he took not in the places he remembers.

For example there is this picture on the fridge that he remembers taking in one place, but now the picture is of his family at a completely different place.  Of course his wife remembers the new place. So…

…understandably this is starting to freak him out a little bit.  So things keep going and getting weirder and weirder until finally he realizes the whole damn world is…

…well honestly maybe I shouldn’t tell you.  That’s kind of a spoiler and you might want to see it.

I won’t ruin it for you.  I’ll just say that the movie gets pretty damn crazy.

I wasn’t sure if I should tell you about this because it’s a little different than make money online type stuff, but honestly, this is just too good not to tell you about.

Alright, Robinhood is a platform that makes it extremely easy to buy and sell stocks.  Don’t get intimidated.

When you sign up to Robinhood, they give you a free stock just for signing up.  This is a stock that you can turn right around and sell for profit and deposit that into your bank account.  That’s right. Free money.

Now I know this because I use Robinhood.  I invest mostly in stocks that pay dividends and are extremely safe.  That’s just my thing. Long term investing.

But…why am I telling you this?

Aside from getting the free stock and making money on that, Robin hood just started something really exciting.  It’s fractional stock investing. Basically you can now buy fractions of stocks.

For example, let’s say you wanted to invest in Apple stock but didn’t really have the extra 200 bucks or so to buy a share of that.  No problem, now they have fractional investing, you can invest as little as one dollar into obtaining a partial share.

This is a really cool opportunity.

The best part about Robinhood is they have a neat referral program.  Everytime you refer someone, you get a free stock, and they do too! Now these free stocks they give you, like I said, they are REAL shares and you can sell them.

Seriously.  If you want to play it safe like me, them look up Aristocrat dividend stocks and learn about those.  It’s already been paying me in passive income over the last couple months and I haven’t done anything except invest in the right companies that pay out dividends.

Okay enough about Robinhood.  But check that out man.  Between the free stocks from the referral program and investing in aristocrat dividend stocks you can pretty much get started for free and start making a little money.

I recently just ended my 7 day $1.99 trial for the Epic Conversions Insiders Club.  It’s sad to say goodbye to that but it’s time.

Now that is just part one of a 2 part process to bring The Insider’s Club up a little bit in price.

Because people undervalue things that are cheap.  The Insider’s Club has always been a discount club to really help those that can’t afford coaching.  See, the Insider’s meet once a month (webinar style) for group coaching.

That way you get the benefit of a mentor and a minimal cost.  The problem is…it’s so cheap at 14.97 that people just hang out and lounge around not taking action on things.

Also, people think that maybe it’s not that good because it’s so cheap.

So at the beginning of the new year the Insiders Club will be going to $47 a month.  Still a great deal for coaching (I usually charge $97 an hour for 1 on 1 consultation) but just not so cheap that people undervalue what it is.

Bottom line, if you are on the fence about being an Insider, now is the time.  It’s going to be $14.97/mo until the end of the year, and all those people who get in before 2020 will be grandfathered in at their current rate.

Extreme value.  And if you liked that little make money online tip about Robinhood, then you definitely belong in the Insider’s Club.

Now if you want to be a “Do nothing Joker” then don’t worry about it.  Just keep skimming for free information and not investing in your education.  I totally understand. We all have to move forward in our own time.

ALright man!  THose are my 3 things today.  I’ll catch up with you tomorrow, but for now, have a great day!  That’s all I got!

P.S. Thanks for everyone who has supported the new podcast.  We’re rolling along with the 7th episode coming out this morning.   We talk all about membership sites on that episode. Check it out.