Posted by KamFatz Posted on November 15, 2019 0 Comments on A story about being frozen in time…(and something about marketing)
Posted in More Customers Tagged affiliate marketing, beginners guide to marketing, online marketing, selling online 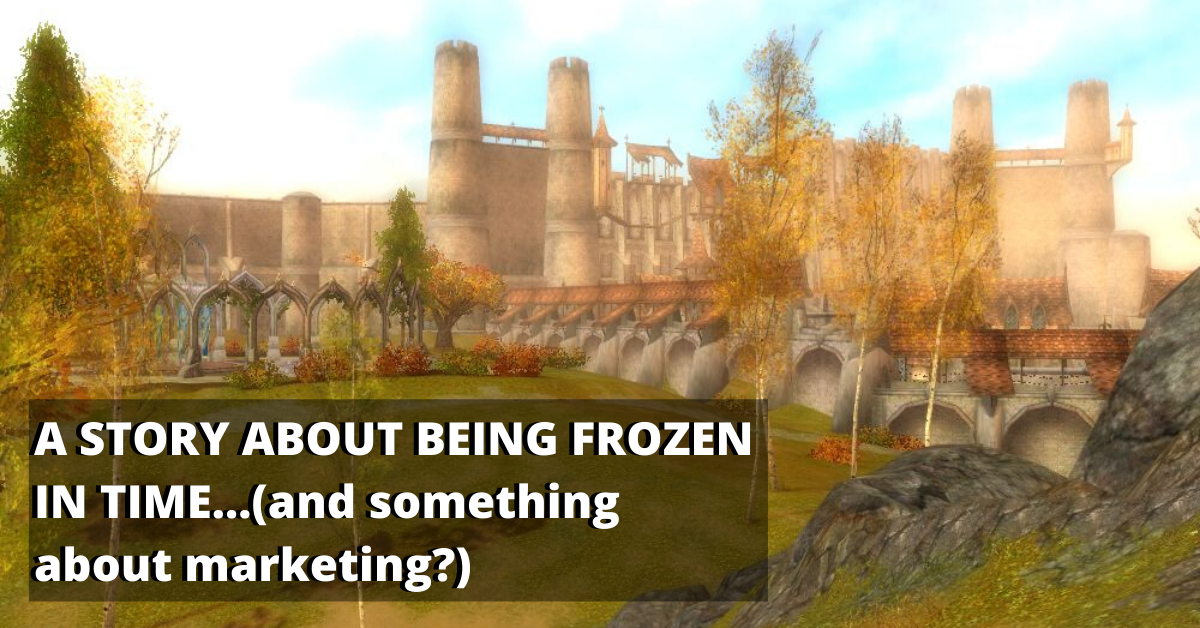 Can I tell you a story?

It’s a little weird, it’s going to help you, and it starts just…

“The last day dawns on the Kingdom of Ascalon…

It arrives with no fanfare, no tolling of alarms.

Those who will remember will speak fondly of the warm morning breeze.

People carry on with their daily lives, unaware that in a short while, everything that they have ever known will come to an end…”

These are the words you hear at the beginning of the old 2005 computer game, Guild Wars.  A game I was a little obsessed with.

These introductory words are spoken softly as you are shown a beautiful landscape of trees and grasslands, a middle-age style Castle and a stunning Kingdom called Ascalon.

You might be thinking right now, “Kam…what does this have to do with making money online?”

I’m getting there.  Relax.

But right now we’re going to go on a ride.  You need to know about The Time Freezers…

So a beautiful place, this Kingdom of Ascalon.  And as it happens, the game of Guild Wars starts on the exact day that the entire Kingdom…


…is about to be destroyed by this magic fire rained down from the sky by these ugly, smelly, troublesome beasts called the Charr (think if you took your house cat and crossed her with a minotaur and fed THAT thing a bunch of steroids…thats a Charr.)

This rain of fire is no joke.  It’s called THE SEARING, and it’s going to be the equivalent of a nuclear warhead all over the Kingdom, turning the beautiful landscape into a barren, harsh wasteland.

I know…sucks right?  You get to enjoy this beautiful place for one day and then it’s completely wiped out and made nasty.

So the way Guild Wars works is that you have this one day to learn how to play the game.  You can do quests, fight monsters, and just generally get a feel for the game.

The cool thing is this day lasts as long as you want.

…it is THIS mission that starts THE SEARING, and forever changes the Kingdom of Ascalon for the worse, forever.

Now when ArenaNet made this game, Guild Wars, they put pre-searing there as a way to learn how to play the game, before moving on to the REAL game which was POST searing.

Afterall, the world of Guild Wars is vast.  Far greater than just the Kingdom of Ascalon.  There is a lot to see and do, once you take that quest and make the timeline of events move forward.

Here is where it gets a little strange.

Something funny happened in GuildWars.  Something that ArenaNet, the company that made the game, did not expect.

A community was forming.  A community that still exists to this very day, 14 years after the game was released.  I know this because recently I logged onto my old account to see.

There was a growing number of people that did not want to leave pre-searing.  They chose to stay, find ways to level their character, and enjoy the game right there in pre-searing.

They essentially refused to move forward.

When I asked them why they choose to stay in Pre-Searing and not explore the rest of the game the answers all are basically the same.

We like it here.  Before the world sucked.  It’s nice. Now keep in mind these are REAL people playing a computer game.  They refuse to advance in the game.

It was weird.  But somehow it made sense to me.

I totally got it.  The pre-searing Kingdom of Ascalon is a beautiful place.

They choose to live their own version of Groundhog Day right there in Guild Wars.  This is how they chose to enjoy the game.

Now Guild Wars was a great game…IS a great game.  It’s past its prime and most gamers have moved on from this old one but still it is widely recognized as being an awesome game, critically acclaimed in fact.

What I realized while playing GuildWars though was that people actually play games for different reasons.  It’s not always about leveling up or finishing. Guild Wars was a prime example of this.

Some people played Guild Wars to finish it, this is true.  Some play for the comradery, the competition and some played for the strategy.  But then there were others who played for different reasons…

…reasons that only made sense if you understand how complex humans can be and why we do strange things sometimes.

Me personally, I was always fascinated with the “Pre-Searing community.”  A group of people that refused to let the Kingdom of Ascalon be torched. They chose to live in exile of that one beautiful day.

In that book he said, “If you’re not confused, you’re not paying attention.”

It’s a funny quote and it has several different meanings, but one that REALLY stands out to me is that simply…

We like different things at different times.  We get emotional. We get logical. We fall in love.  We break each other’s hearts. We change our minds early and often.

Humans are complicated and dynamic.

The Time Freezers of Guild Wars are just one example of how a group of people can like a video game for an entirely different reason that nobody could have predicted, not even the people who made the game.

“If you’re not confused, your not paying attention.”

For the past several years I have been promoting my own and other people’s products as a vendor and an affiliate quite successfully by crafting simple messages that I could write quickly and easily.

My original plan was to take this idea of human complexity and just try to hit all the angles of why someone might like something.

Maybe this person likes a product because of the origin story of the vendor.

Maybe that person likes the features and benefits.

Maybe this third person really needs to hear what the whole thing would look like if I was personally going to use it in combination with this other thing over here.

And then maybe there is another group of people that have been sitting back listening to all my different messages about this product, and those messages were stacking.

What were they stacking?

Those messages were stacking legend for that product.

Those messages were stacking “top of mind” awareness for that product.

Those messages were getting those people thinking…

…and eventually it becomes a no brainer to purchase after so many different messages about the same product, all hitting on a different point.  All talking about a different aspect of the same thing.

As I write this, I will be launching my new product Email Secrets: 20 Angles to Sell Anything (Even if You Have No List!), in about 7 hours.

It’s a special product because I want to teach you 20 of my personal Email Secrets.

20 of my most profitable, easily crafted messages that you can stack to great result and finally start seeing some results.

It’s not about writing.

It’s not about being some kind of great and clever writer.  You don’t need to be a great writer to do this.

This is about strategy.

This is about playing chess and thinking several moves ahead.

Many affiliate marketers go to promote a product and they are like musicians that only learned one song.

Can you imagine if all PInk Floyd ever played was Comfortably Numb?  It would be ridiculous after a while…no matter how good the song was.

That’s the problem with most affiliates out there that are struggling.

They are playing the same song over and over again.

What I’m talking about is learning how to play the WHOLE DAMN album.

Give them “The Wall!”  They deserve it!

Because nobody gets into the Rock and Roll Hall of Fame on one great song.

One great song makes you a “One Hit Wonder.”

Is that what you want to be?  A one hit wonder?

…it is critical that you learn NOT JUST ONE SONG…

This is the number one reason why most people trying to do affiliate marketing don’t see much luck.

It’s like they put out that “hard promo/features and benefits” message over and over again.

It’s a good song but you just made your list “comfortably numb” with the same song and dance about a million times.

Don’t be the guy at the party who knows ONE CARD TRICK.

…you just know that as soon as he has a few beers in him, the deck of cards is coming out, and you are going to have to watch this dumb card trick again…just like the last time.

Don’t be ONE CARD TRICK guy.

…this is about becoming the Harry Houdini of promotions.

I’m talking about the guy who, when he pulls out a deck of cards, everybody gathers around because shit is about to get real.

This is the guy who never goes home alone.  Who always gets the girl.

This is the guy who everybody wants to talk to.

This is the guy who is always getting invited back because…

…I mean the cats just the life of the party.

That’s what I’m talking about.

The Harry Houdini of promotions.

Don’t be ONE CARD TRICK guy.  Pick up my Email Secrets and…

…BE THE HARRY HOUDINI OF PROMOTION!

Also…can I get an Amen for turning a video game that I wasted too much of my life on into a promotion for something that could change YOUR life forever?

Have a great weekend!  I’ll see you inside Email Secrets!