Posted by KamFatz Posted on August 22, 2019 0 Comments on Everything I Learned About Marketing from Isaac Newton and his 3 Laws (before I fell asleep in Physics class!)
Posted in Motivational Tagged #inspirational, how to succeed online, marketing laws, motivational 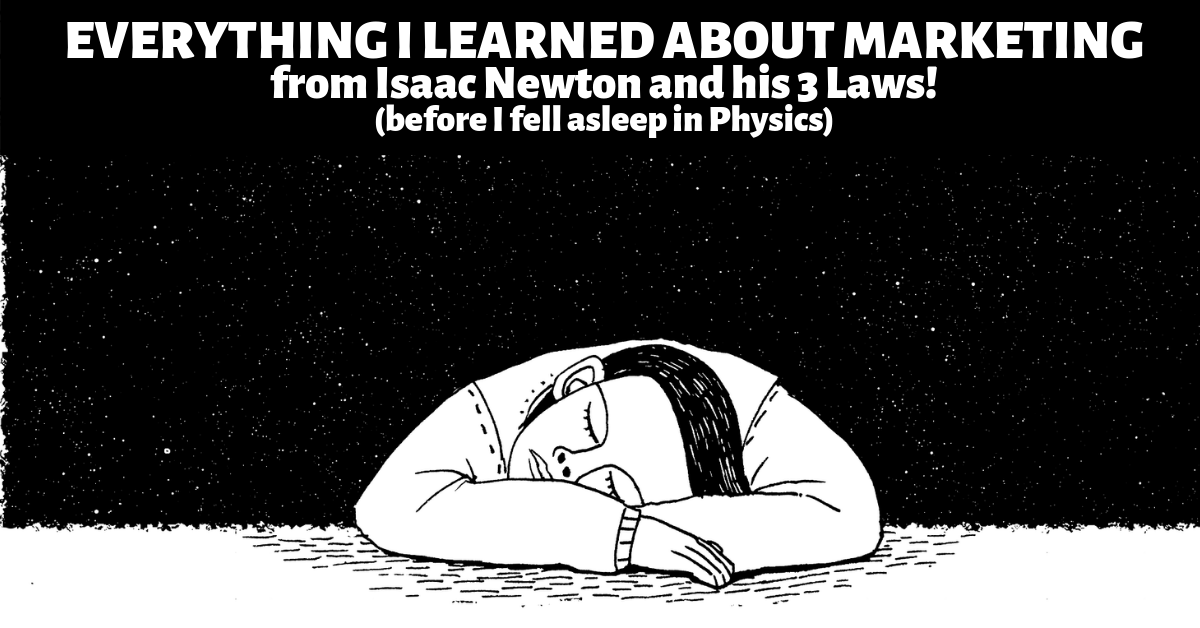 Do you guys know about Isaac Newton?  I know…what a silly question right?

Well…I just thought I would start there because, I for one, used to fall asleep in classes like that when I was in school…

…and depending on who you are and when you might have fallen asleep…there is a chance you might not know who the hell I’m talking about (no judgment.)

That being said, to catch up really quick, Isaac Newton came up with these 3 laws of motion.  And they are super important because…

…well they tie into almost EVERY physical thing we deal with in life.

But what I figured out as I started my online journey, was that Newton’s laws don’t just apply to physics…

…they kind of apply to…well…almost…everything.

Newton’s First Law of Motion states that if the forces acting upon an object are balanced, then the acceleration of that object will be 0 m/s/s. Objects at equilibrium will not accelerate. According to Newton, an object will only accelerate if there is a net or unbalanced force acting upon it.

Newton is basically saying that if there are equal forces affecting an object, they are going to counter each other and that object is staying right where it is.

If I hit a hockey puck on the ice, eventually it will come to a stop because of the friction from the ice.

I think that applies to making money online as well.

We can never truly move from our current position by holding onto balance or comfort.  It is only when we push boundaries and explore new ground that we transcend our “status quo” situation.

Comfort and balance are essentially the ice causing friction that brings change to a stop.

For example, you might be buying new courses all the time to entertain the idea of starting an online business but if you are comfortable in your current job (not necessarily happy, but comfortable) then…

…is it possible that those two forces are causing a sort of equilibrium, countering each other, and keeping you exactly where you are?

Am I saying that balance and comfort are bad and that you shouldn’t have them in your life?

No.  Balance and comfort are great…however…

…I am saying that if you are trying to change your circumstances…they are bad.  It’s not just physics…it’s life as well.

…however that is also going to depend on the size of the object.  The bigger it is (the more mass it has) the slower it will go.

The other part is true too though, If your plan is too big, too complicated, or has too many moving parts, it’s going to slow you down.

It’s easier to push an empty shopping cart than a full one.  The empty one has less mass. So…

The Third Law of Marketing – Action is King

Newton’s third law famously states that for every action, there is an equal and opposite reaction that acts with the same momentum and the opposite velocity.

It means that in every interaction, there is a pair of forces acting on the two interacting objects.  Forces always come in pairs.

That’s a lot to take in when you think about it and it might not be the easiest thing to understand but an example of what Newton is saying would be letting air out of a balloon.

Let’s say you’re holding a balloon and you let the air out of it.  While the air is going to rush downwards, the balloon is going to fly upwards.

Another example would be when you jump onto a diving board.  You jump downward onto the board, but that board springs back upwards.

So now that I’ve thoroughly bored you to death with Newton’s Third Law, what the heck does it have to do with marketing and making money online?

Well, Newton’s third law is a keen reminder that Action rules the land of online business and marketing.  Action is the real king.

It is only through action that anything happens around here.   No matter how uncertain I might be to move in a particular direction, I am always closer to success when I take action.

If I am creating no action, there will be no equal and opposite “reaction.”  That’s not just the laws of physics, it’s also the laws of life.

So there you have it.  The three big laws of marketing, as stated by me, as inspired by Sir Isaac Newton and his laws of motion.

Law 2 – Keep it Moving, and Keep It Simple

I feel it is my duty to add here that all of the above, I have learned from years of experience in the “make money online” space, through trials and tribulations, ups and downs, successes and failures.

But the truth is…I didn’t write this article because I cared what I thought…the truth is I wrote it because I wanted to know what YOU thought.

So be sure to leave me a comment, let me know your alive out there, and tell me…

…does this make sense to you?