Posted by KamFatz Posted on August 1, 2019 0 Comments on 5 Things I Learned From My 3 Day Digital Detox…
Posted in Motivational Tagged digital detox, motivational 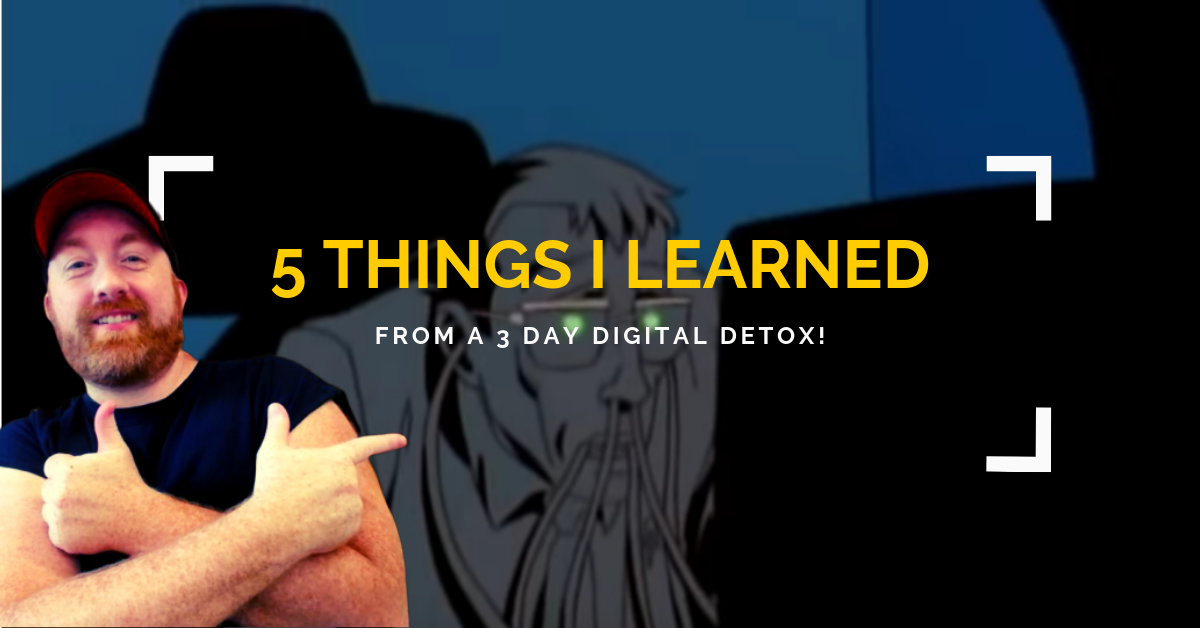 I have a real problem.

For the last 3 years, I have been online in some capacity every…single…day.

…I was online doing it.  I guess that makes sense since I run a digital publishing business and all but…

On top of that, I noticed that the majority of my entertainment lately was coming in the form of television or tablet.  Basically watching shows, movies, or video games.

Whatever happened to reading books?  I used to like to just kick back and actually read a book.  Whatever happened to family board game night? Why did it always seem like I never had enough time to do anything substantial anymore outside of “online?”

It was time for a change.  It was time to disconnect from all this “noise” for a few days.

So I committed to a 3 day digital detox.

I shut down the tablet, flipped off the smart phone and locked them away in a drawer.  I powered off my desktop and packed up my chromebook. I unplugged the television…

…and I committed to no screens.

To take this whole thing to another level, I also committed to drinking only juice for these 3 days.  Juice, water and herbal tea to be exact. Six 15 ounce juices a day, every 2 hours with water and tea inbetween, if I got hungry.  No sugar in the tea.

So what were the results?

But what about the digital detox.  What did I learn from disconnecting from screens for 3 days?

I had 5 big takeaways.  Here they are…

ONE) Rotation Reader  – All my life I have been a “read one thing at a time” kind of guy.  But without thinking over the course of this 3 day period I noticed that I would read 1 book for about an hour, take a break, and when I came back to read again I would select something different.

I literally had 5 books going over the past 3 days.  I was aware that I was doing this and I recognized that it was really weird, but it felt natural for whatever reason and just seemed like the way I wanted to do it.

Of the 5 books I started, I finished one of them.

I don’t know if all the internet usage has kind of rewired my brain and how I like to consume information has changed, but that is what it felt like.

TWO) The Slowing of Time –  The second big takeaway for me was that time really seemed to slow down.  I felt like I had endless amounts of it. These 3 days felt like 3 weeks. It seemed like there was plenty of time to get everything done.  It was a good thing.

I don’t know if it’s because of the 24 hour news cycle that we now find ourselves in today, or because we are always connected in this “daily update” kind of society…but I can tell you that the narrative definitely slowed down for me and it was awesome.

THREE) Stream of Thought Stretched – I noticed that I would think about specific ideas and subjects for longer periods of time, which in turn meant that I thought about them on a deeper level.  I took those ideas and thoughts further than I normally would have.

Generally, (and I wasn’t aware of this until these 3 days) I will think about something, and very quickly I will move on to the next thing.  I might jot it down if I think that it’s a good idea or something that I don’t want to forget, but I won’t spend a lot of time on it.

During this digital detox, I would carry out lines of thought to more of an internal resolution.  Even simple things like “What do I think of the new Lion King remake?” In fact, let’s use that…

So as a guy with kids who might like the movie, I watched a video review and that lead me to another video review (recommended by youtube) and then that leads me to a 3rd and 4th review or reaction video about this movie.

Now, my head is full of other people’s opinions on this movie that I haven’t seen and probably don’t really care about but…

…for some now reason I thought that Disney was ruining all these classic movies, there was a hidden agenda, and why can’t people just leave awesome things alone that don’t need fixed.

A bunch of other people’s opinions, suggested by youtube, consumed by me, and filtered through my mind to form some kind of Frankenstein viewpoint on something that I didn’t really even care bout.

What I realised pretty easily when I stepped away from all the opinions, and what should have been simple was this:

When I was a kid there was a movie that I really enjoyed called The Lion King.  It still holds a special place in my heart. Now there is a new Lion King movie for a new generation of kids.

I wasn’t the target audience.  It doesn’t matter what I think of the movie.  It’s not for me. I wasn’t meant to get it.

That was my simple and true opinion.  My judgment had been clouded on this simple little thing by all the noise.

Now imagine if your judgment is being clouded on tons of issues throughout your life?

It’s like a whole bunch of talking heads taking up space in your mind, making things more than they really need to be and in some cases just creating issues that really weren’t even issues to you otherwise.

I swear for a minute it almost seemed like everyone was transgender and couldn’t find a bathroom to use.  Then shortly after, it seemed like the world was being taken over by demonic feminists and SJW warriors.

I’m not saying those issues don’t exist…but just to say that they shouldn’t matter to me and really have no place in the narrative that is my life.

Just being able to follow a line of thought a little further and a little less clouded made a big difference when it comes to my outlook on the world.

FOUR) The 2AM Anxiety Paradox – For the last couple of years I have had a problem.  I couldn’t sleep.

I would try to go to bed at 11pm or so, only to spring back up in a cold sweat and stay awake until 2 or 3am battling anxiety.  What would I do to battle the anxiety? Watch videos on my tablet or work on the computer.

…but then I just laid back down and went back to sleep.  So why is that? Well I trace it back to this blue light problem…do you know about it?

Blue light is a color in the visible light spectrum that can be seen by human eyes. Blue light is a short wavelength, which means it produces higher amounts of energy.

It used to be that the only source of blue light was from the sun.

I could get really deep into this but I’ll let you do your own research on the topic of blue light.  However, the fact of the matter is that blue light has been proven to decrease melatonin secretion and disrupt a person’s circadian rhythm.

Short sleep is linked to many problems including depression, anxiety, obesity and even diabetes.

Based off of my 3 day detox and how my own personal anxiety melted away, I tend to believe it was doing something.

FIVE) The Dreamscape – The fifth thing that I noted as a pretty big deal was my dreaming during these 3 days.

…however, they felt so real and unbelievably intense while dreaming.

That was a big change from my normal dreaming.

I don;t know what that means or why it happened.  I can only theorize that perhaps the increased focus and clarity that I experienced during the 3 day digital detox was also transferring over to my dream state at night.

Does that make sense to you?  Let me know what you think.

Ultimately, I think that these 5 big takeaways culminate to this…

I control the narrative of my life.  The speed of it, what I think about, what I care about, how I feel about and how I react to.  Some things just shouldn’t matter while others should and get ignored.

Sometimes, I think you can’t see the forest for the trees.

Have you ever witnessed a really beautiful drone shot?  You know the ones where the drone lifts off the ground, and then fairly quickly you see the entire lush landscape open up right before your very eyes?

A digital detox can feel a lot like that really beautiful drone shot.  Things that seemed too busy and confusing before, now seem clear and easy to navigate.

All in all, the 3 day experiment was a pretty telling one for me.

I have decided to do one of these every single month just to reconnect with reality a little bit.  It’s funny how we can disconnect without even realizing it.

My next digital detox will be on august 28th.  Feel free to join me and share your experiences.  3 days really isn’t that long, and the benefits can be pretty profound.

Anyways, I hope you have gotten value out of this article and it has benefited you in some way, my name is Kam and I’ll see you in the next one!