Posted by KamFatz Posted on October 2, 2018 5 Comments on Lucky me…(or life in the online middle class)
Posted in Motivational Tagged #inspiration, #inspirational, #motivation, #success, how to be a successful entrepreneur, motivational 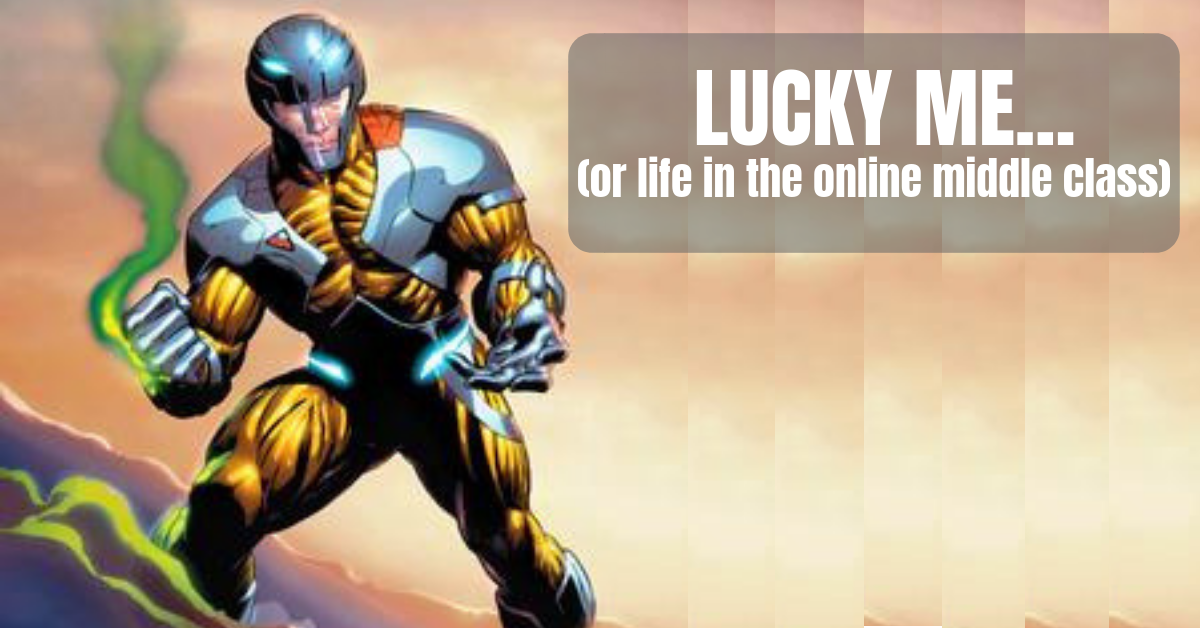 You know, I’ve seen a lot of things in my day.

From ebay to amazon…

…from product launching to paid advertising…

…it’s safe to say I’ve been around the block.

Feels like long enough to go from the hero to the villain (blatant Dark Knight reference).  Successes and failures litter my journey like notches on some old gunslinger’s belt.

“Oh great did this prick just relate himself to Batman?  This should be a real humdinger…”

You’re Goddamn right I did.

I admit, I don’t take back the things I say around here very often either…

…if I said it then I meant it. So I’ve burned a lot of bridges along the way.

People like to judge people.  Everyone’s got an opinion. My opinion is fuck what you think, I’m too busy.

Seems like I’ve been chasing that 7 figure dream online for years but I’ll probably never get it.

The “online middle class” is an okay place and far better than working for someone else, I’ll give you that…but it’s not the laptop lifestyle that sucked us all in.

People say my content has gotten darker and more negative….

People say I should keep it upbeat and light.  Be fun, positive and hopeful.

People are always saying something.  The opinions collect like rotten leaves in my rain gutters…

…but keep it fun.

…but instead have been struggling to make money online for 1 year, 2 years, 3 years…they haven’t made a dime.

People who WISH they could get to the “online middle class.”  Like I have anything to complain about. What a joke.

…Nothing light or fun about that.

But I hear stories like that everyday from people.  Their stories haunt me a little bit. I never know if they are telling me the truth or bullshitting me.  I trust less people every year around here it seems. Feels like everyone has another angle sometimes.

You know why my content seems more dark and boring?  Less pie in the sky?

I’ll tell you.  Because I’m not about that bull shit.

I’m about the real shit.

When I win online it’s because I went hard as fuck in the paint (random basketball reference for you) and because I was really, really smart about it…not because I pushed some magic “easy” button.

When I make mistakes, when I get too careless, I fall short like everyone else…

I’m that bastard people come to on the way back down after they lost most their money to some 7 figure “guru” whispering sweet nothings of millions in their ear, cruising around in a Mclaren they bought on the hopes and dreams of every chump that came before the last sucker…

…and there’s one born everyday but…

…Now, the honeymoon is over.

When I get them, they are bitter, about to give up, and jaded as fuck.  They are just trying to find SOMETHING that would prove they haven’t wasted the last 5 years of their life.

They always say the same thing about me when they come knocking too.  “You just seem down to earth and honest man.”

Not winning any ribbons for excitement that’s for sure.

…is teaching them how to start a business that will probably take about a year to really get going well.

That’s not sexy at all.  Not one fucking bit.

Nobody wants to hear they are going to have to spend the next 12 months learning a bunch of shit they don’t want to learn, just to get a business going…

…spend the next 12 months building something that takes a commitment to consistency and adjustment.  That’s not why they came here. Sounds too much like starting a real business. Too much effort.

…so it’s no surprise not many are interested in that.  It takes heart to stomach the truth. It takes courage to embrace the work and not run from the work.

Key point in a long diatribe…Don’t run from the work, embrace the work.

Hell, I wouldn’t have been interested in that either when I first got started.  I was on that easy shit back then. I wanted the push button dream.

Interesting thing about that dream…

…It’s easy to believe in because that’s the same dream that everybody tells you doesn’t exist…yet in the next sentence on their sales page, tries to sell you.

It’s that double speak you must be used to by now if you have spent at least 15 minutes of your life in the MMO space.  That’s “make money online” for those not fully indoctrinated.

If you listen very closely you can hear them now, like hearing the ocean with a conch shell pressed against your ear…

No bruuhhh…I don’t want to scale it bruhhh…because you’re full of shit bruhhh.  Your making your money off of me buying your bullshit bruhhhh…

And the game is rigged too.  Just like that Browns v Raiders game yesterday.  Fucking rigged. From the universe to the platforms…there is always something trying to keep you in your place.  It’s going to take a special effort to break the loop. No doubt on that.

Doesn’t mean you can’t do it.  That’s why underdogs are special.  That’s why we love a good rags to riches story.  Because it’s rare. You were never meant to do it.  It’s going to take a special effort.

…the guy who risks it all, learns fast, and goes hard in the paint all the time probably wins.  I say probably because this is life…we don’t always get what we deserve.

Does a guy win if he gets to 25k a month but loses his wife in the process, because she’s sick of being ignored?  You tell me, I don’t know anymore. Sounds subjective.

We don’t always get what we deserve.

Actually scratch that…we don’t deserve anything.  We get exactly what our actions dictate. And if we are good at analyzing what happened we get better and better at it.

Yeah that’s it man.  What we deserve in life is in direct response to the action we take and how we adjust to our mistakes.  ANd I feel like that’s important. I feel like this post is important.

But at the end of the day…what am I trying to say?