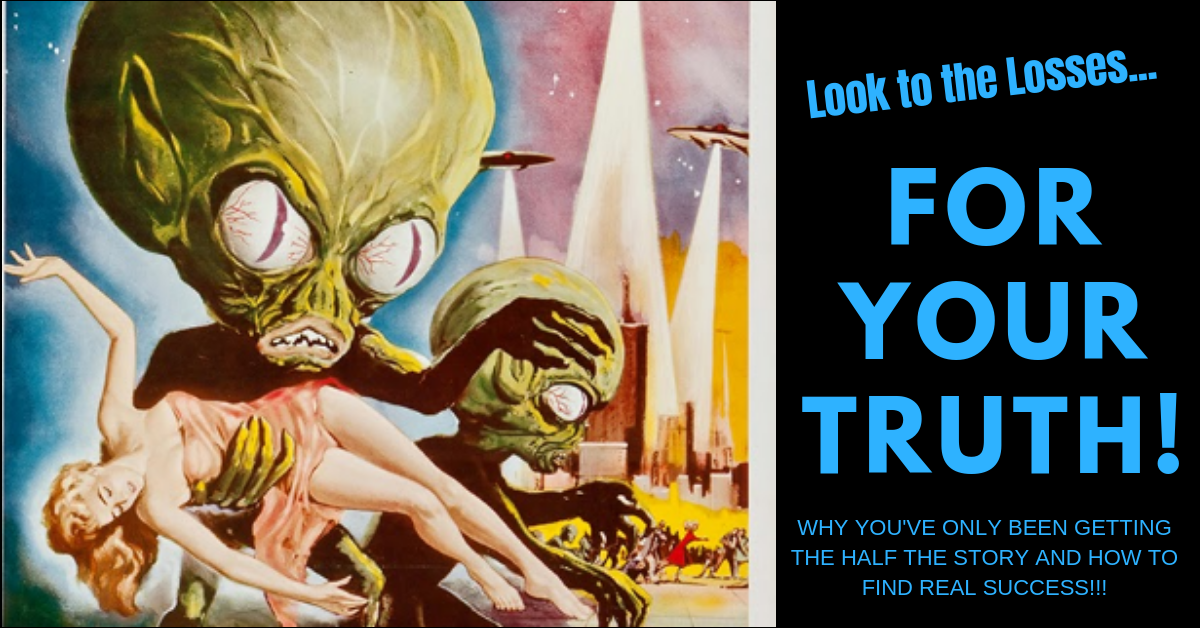 Look To The Losses For Your Truth (or Why You’ve only Been Getting Half The Story And How to Find Real Success!)

People are always crying about getting ripped off around here.

It reminds me of when I was in the Navy.  All the new recruits used to cry the blues about how the recruiters lied to them.

I’ll admit, I just used to laugh at them back then.

And do I laugh at the newbies now?

Not exactly.  Let me explain.

I am a firm believer in the idea that none of us deserve anything.  If you work hard enough, you are clever enough and ambitious enough…

…then maybe you get to win.  Not because you deserve anything, but instead because you figured something out.

I think the fact that you are not rewarded because you “deserve to be” is important to remember in these dark days of mass entitlement.

None of us really “deserve” anything.

The gods of Internet Marketing don’t give participation prizes…

…not because you hung out in a bunch of IM forums and facebook groups for years and not because you doinked around, brilliantly half assing it on every low ticket product from WarriorPlus Drive to Clickbank Avenue…

What is required is a paradigm shift.

A way to break the cycle.

A loophole in the fabric of the universe…

…a universe that says you are destined to work at a dead end job that you hate for the rest of your life.

I will tell you how.

Look to the losses for your truth.

The truth is you are not being told the whole story.

Would it be hard to put together a 286 piece loft bed with only half the directions?  I’ll answer that for you…it would be pretty damn hard, I have some experience in this.

Do you think it would be easy to understand the movie if someone edited it down to JUST the action scenes?  I mean, you might get the gist of it but you probably couldn’t write the movie review.

Remember when you were in elementary school and you were supposed to read a book and do a book report?  You had that amazing idea to just write the book report from the “back of the book” summary?

That shit didn’t work did it (lol).

Well, many times in the world of internet marketing it is the same thing.

Marketers are a prideful, arrogant lot who like to win.

It’s embarrassing to lose.  So like anyone else who is embarrassed by something, many marketers do not speak of the losses.

….but as marketers we don’t just focus on the positive.

We sell the dream.

But the dream is not the whole story.

ANd without the whole story…it’s a little hard to achieve the same results that the story is showing.

I mean, think about it.  Could Dorothy ever have gotten out of Oz if nobody bothered to tell her about the Yellow Brick Road?  What about those shoes? What if she would have never gotten those ruby shoes?

It might have been a different story right?  Maybe not such a classic?

Do you know what happens to new people who get sold the dream and only understand half the story?

They walk away with their brand new, shiny step by step actionable instructions and they tend to fail quite a bit.

After that, they curse the stupid “guru” who sold them the dream and they move on to the NEXT dream.

Eventually, their bitterness turns introspective and they begin to wonder if perhaps they themselves, might be cursed…

…afterall, everybody seems to be winning and making money except them.

What is the problem?

I’ll tell you what the problem is.

You only got half the story.  You only saw the action scenes.  The negative aspects of the story were purposely withheld from you in an effort to make the story…

But not the whole story.

I once spent 5 years in the United States Navy as a Hospital Corpsman.

Before I left, the Navy told me they had given me an education worth about 100k and I had enough field experience to test out for my Nursing license (lpn)…

…I moved to Rhode Island and got a job unloading trucks.  After I got sick of that, I went on to working maintenance at McDonalds with my 100k education.

While at the Golden Arches, sweeping floors and living up to my Generation X background of squandering my education masterfully and wasting my full potential…

…I noticed that all these old timers were always hanging out there all the time talking about their trips to Foxwoods (nearby casino.)  It was a daily thing. A ritual.

These old guys always lounged around at that local McDonald’s like a bunch of salty dogs in good ol’ Rhode Island talking about their wins.

As I swept the floor each morning I would begin to wonder if these old bastards ever lost.  I mean…

…what the hell am I doing sweeping this floor…these guys seemed like they were winning every single time they went to that casino.  I mean…I want to win too…I like easy money…

I started thinking…”Hell, that must be the winningest Casino known to man because these old timers are striking it rich daily!”

And then I visited that damn casino for the first time.

It looked like the goddamned Emerald City as we rolled up.  Literally, glistening in the sun a bright jade green color. Parking lot full of people, shuttle busses to give everyone a ride up to the place.

I thought, wow, this is awesome.  It was all systems go for me. All green lights!

The place was beautiful inside with everything you could think of to do in there but no clocks and the main attraction?

Gambling.  And off I went…time to get MINE!!!

It took me about 2 hours to figure out that those old dudes at McDonalds were not telling the whole story.

There was a lot of winning going on in there all right…for the casino.

I quickly realized why this place was so amazing looking.  It was all built on the dreams of it’s “guests.”

It does not take long to lose lots of money in a Casino.  They know all the tricks.

So people leave many times feeling like fools for losing a ton of cash.

No sir, they are going to keep going back until they get a win.  And then they to will have something to talk about. Something cool and awesome that makes them feel good…like a winner.

Now, I’m not saying that marketers are like addicted gamblers who don’t know when to say when.  But I am saying that embarrassment is real and most people are not too interested in talking about losses.

It’s a paradox though…

They are going to have an unrealistic expectation from only being fed half the story.

Maybe, they puzzle it out for themselves by exploring multiple strategies from multiple people, until they stumble upon something that is working for them.

Or maybe they give up feeling like a fool.

Kind of like throwing a bunch of stuff against a wall and seeing what sticks.  It leaves a lot of people in frustration.

When I started Epic Conversions in 2016 I adopted a strong “share the losses AND the wins” mentality.

I didn’t want to be like those old salty dogs at McDonald’s all those years ago.  Fooling people with the wins and hiding the losses. The losses are just as important as the wins.

If you don’t believe me, go ask anyone who’s ever been married.

Yeah, it would be embarrassing to share the losses.

Yeah, I would be perceived as probably less successful than some.

And yeah, my business would probably grow a little slower because of it.

I mean, do you want to be taught how to succeed by the seemingly “mega successful” lambo driving dude who appears to really have his shit together?

Or do you want to be taught how to succeed by the middle class, sleeveless shirt wearing, redneck who talks about messing up his last sales page on facebook?

If we are being honest…people go for the sexy dream most times.

I usually get them on the way back down when they have sworn vengeance on all things internet marketing, made like 20 guru’s their mortal enemies…

…and are now just trying to figure out how to make a little extra money online (lol at that imagery…been there.)

I am the practical guy who will tell you about my mess ups.  It’s important to me for you to understand I am a real guy and this is a real business that you can do…and it’s okay to mess up.

We all mess up.  And if you are like me you mess up over and over again, each time adjusting and getting a little better at what you do.

This last product I launched, The Easy 23, was a solid launch.  But I did make a pretty big mistake.

I got too cocky with my sales page.  Too overconfident, and when it didn’t convert like I wanted it to, I had to make another one.

I literally spend the afternoon of the first day of my launch penning a brand new sales letter/page because the one I had in place was converting at a miserable 6%.

I was wasting a ton of traffic.  I was losing a ton of money. This is what was buzzing through my head as I cursed my stupidity on that first day furiously typing a 3rd sales page.

So finally, I got my new sales page in place and by the beginning of the second day I had my conversions up to a blazing 31%.  The product launch was getting salvaged and things were looking up.

However, how many affiliates mailed for me once that first morning and when the product did not convert, moved on?

I estimate I probably lost around 2k on that little mistake.

So the lesson there?

Always work from a template on your sales letters and pages.  Don’t get TOO creative in that department. Always roll with a back up and make sure that backup is hitting on a different angle.

This is real marketing and I am a real marketer.  If you want to know the whole story…

…if you want to know who you should follow and learn from?

…take this small piece of advice to heart.

Look to the losses for your truth.

Find the marketers out there who are putting their losses on display for the world to see.

And I don’t mean some long lost mistake they made in the beginning of their career back when they were still living in “a trailer.”

I mean, Jesus, it’s like every internet marketer now started their journey in a trailer with a bunch of drug addicts…

…but that was a long time ago…before they bought a Bugatti.

Now, shit is different right?  Now that you have a super car and live in a mansion…you don’t mess up anymore right?

No mistakes are ever made?

Here is what I am saying.  Finally, to the point.

Everyone messes up.  Even when they win at a high level, they still mess up.  To be fallible is to be human.

If you want to win here you need to see the whole picture.  Look to the losses for your truth.