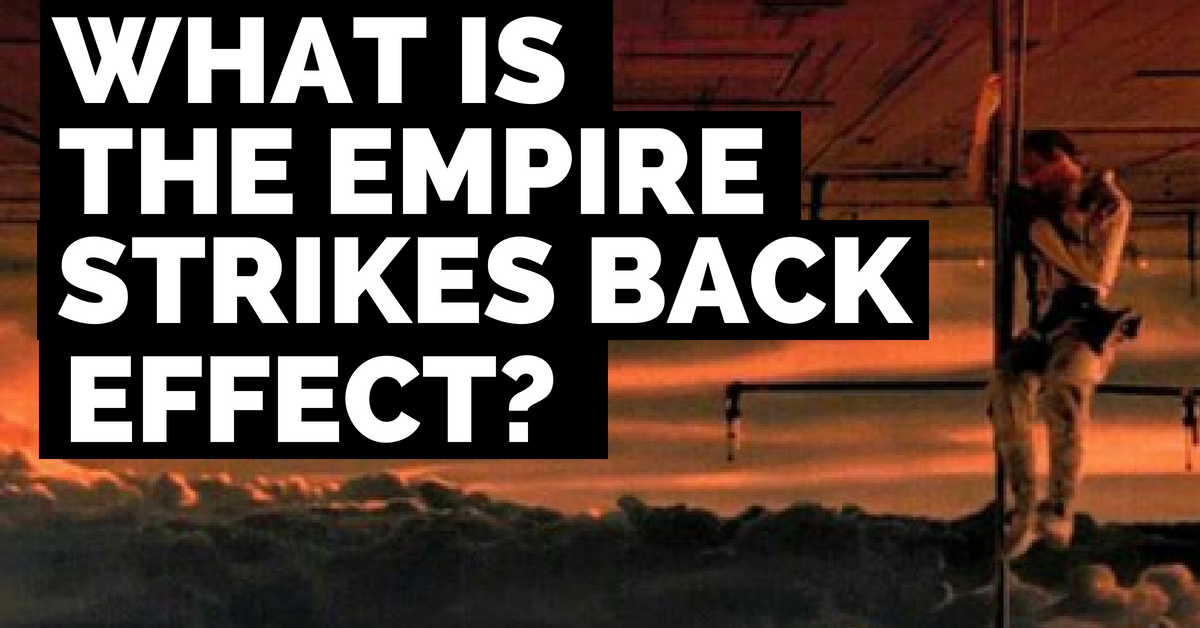 Do you know about The Empire Strikes Back Effect?

You see, The Empire Strikes Back is a really funny movie…

…not ha ha funny either.

I mean it’s the kind of funny that leaves you thinking you’re not quite sure how you feel about it.

It drops you off at a really dark point in the story with all these cliffhangers…all these open loops.

Sure, from 2018 we might look back on it as one of the greatest films ever created but in 1980 when it was released…

Think about it…they had waited 3 years from the original Star Wars until The Empire Strikes Back came out.

And it would be 3 MORE years until Return of the Jedi closed all those storylines that Empire left people hanging on.

From Luke losing the duel, his hand, and maybe even his mind a little bit to Darth Vader, to Han Solo being encased in carbonite…

…let’s face it The Empire Strikes back ended our heroes on a dark note.

It was met with mixed reviews too.

People weren’t quite sure how they felt about it but honestly…I think they were mad because they got left on all those major cliffhangers.

They got no closure.

Years later, we love The Empire Strikes Back.  We hail it as maybe the best Star Wars movie EVER!  But we get the luxury of having a 3rd movie to watch.

So what the hell is my point here?

Why am I talking about The Empire Strikes Back for God’s sake and what the hell does that have to do with making money online?

It’s something I discovered when I started mentoring people.

You know how people always say that once they figured out they could make their first dollar online they were off to the races and they never looked back???

Yeah, that’s not true for everyone.

Some people experience a little success online and when it comes time to rinse and repeat they run into all kinds of trouble.

It’s like an effect that comes over people after they have achieved a little bit of success, but not as much as they had pictured in their minds…

…and now they know what they have to do to truly win.

A whole bunch more of what they just did.

Only now…nothing is new…or at least it doesn’t feel new anymore.  The novelty is worn off.

Now comes the rinse and repeat portion that you always hear marketers talking about.

You know…”let me show you this easy way to make money online…then you just rinse and repeat until you’re RICH!”

Nobody tells you what that’s like, “rinsing and repeating.”

It requires more discipline and dedication to stay with it, than when you had never done it before and everything was brand new.

The truth is there is MORE to learn and there is another frontier.  The place you were trying to get to…

…only to get there you have to slog through a bunch of stuff that you have already done before and that isn’t exciting.

It’s kind of just a bunch of work.

That must be how Luke Skywalker felt at the end of The Empire Strikes Back.

Here, he thought that he was going to go duel Darth Vader and save the galaxy…

…but all that happened was he lost his hand, got his butt kicked and figured out that Darth Vader was actually his dad…

…He must have been hanging from that antenna thinking…

“damn…this is going to be much harder and take way longer than I thought…I have really underestimated my task.  And on top of that my dad is a freaking Level 60 Douchebag!!!! Damn it!”

(wait until he figures out Princess Organa is his sister lol)

…the greatness of Empire Strikes Back is that the fans watching the movie were left in a similar emotional state as Luke and the rebels when it comes to the story.

They wanted to know what happened.  Instead they got left with a bunch of crap where NONE of their heroes won at all!

It’s a lot like the first time someone launches a product.  They might have won a little bit…

It’s the Empire Strikes Back Effect and my friends the struggle is real.

This is a point where many newer marketers give up.

They have experienced a little success but they have worked hard for it.

And now they think they know what’s behind all the hidden doors.  How everything works and why everything happens.

Now they are left with the…”rinse and repeat.”

That can feel frustrating and boring.

And many times they go running into the warm and waiting comforting arms of the next shiny object sitting in their email inbox.

And the cycle begins again.  It’s ironic and paradoxical.

ANd this is how people get demoted and stay at the bottom of the “marketing pile” for years.

I want you to take comfort in something here.

Luke Skywalker did not give up at the end of The Empire Strikes Back.

He went on to become a badass Jedi Knight and defeat Darth Vader.

Many of you set out to accomplish something online.

Learning how to do something and seeing a little success with it is a great benchmark for the future.

It proves that you are on the right track.

But you have not accomplished what you set out to yet.

Do not fall victim to The Empire Strikes Back effect and give up here.

The ability to learn from failures.

And The ability to adjust strategy.

These things have gotten me further than anything else.

…lots of people give up after they have seen a little success.  They lose a few of the critical allies of success, namely ambition and consistency.

Don’t be that person.

Knowledge is power and now that you know about The Empire Strikes Back Effect, you can be ready for it.

Go forth, conquer, come on back whenever you need another Star Wars analogy lol!