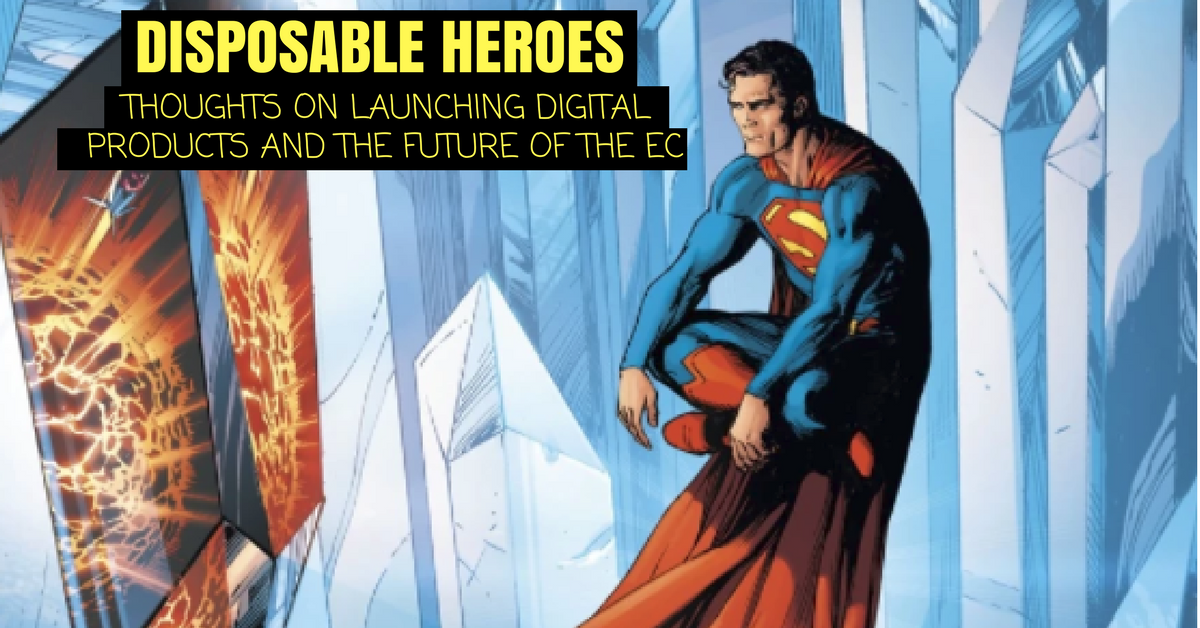 Thoughts on Launching Digital Products and the Future of the EC

Have you ever felt like you didn’t fit in somewhere?

I know someone who has.

The Man of Steel was born on a planet far away that was pretty much destroyed when he was born.

And although he resides on earth, and fights the good fight, he is not one of us.

He never was and he never will be.

That must be pretty hard.  Even with unparalleled power and ability, Superman is alone in most things.

From time to time, if you follow Superman, you will note that he takes solace in a place known as his Fortress of Solitude.

It’s an icey crystal palace in a hidden northern polar region that very few know the exact location of.

But this is where he goes when he needs to get away from everyone and figure things out.

That’s what I like about Superman.  He’s a really good guy. He wants to help everyone.  He stand up for what is right and protects the little guy…

…but he doesn’t have it all figured out.

Superman, for all his power, is fallible.  And when things happen that he doesn’t understand or when he makes a mistake, you will see him retreat to the fortress to dwell on it.

The Fortress of Solitude is a pretty cool place too, even if it is just a fictional creation.

It’s got giant statues of both his mother and father from Krypton.  A bunch of artifacts from his home planet, and a lot of cool technology to go with it but…

…none of us are Superman.

When we make a mistake we don’t get to retreat to a giant fortress in the middle of nowhere.

In fact, if we work online, the closest we can get is to stay offline for a little while, spend some time with our family, get some critical distance and try to figure out how we messed up and where to go from here.

And, unlike Superman, nobody really cares if we come back or not.

The Launch game is both beautiful and flawed to me.

It’s easy to ignore when you are winning.

It’s hard to miss when you are losing.

I can think of no better way to jumpstart a new business online than with a few product launches, no matter how financially successful they are.

They will build your authority, status in space, audience, and networking ability massively.

There are 2 things that really bug me about the launch game.

When you launch products frequently, it gives your assets a “throw away” feel.  Like they somehow have less value 3 months after release.

I put a lot of time into my products.  They are meant to be heroes for the common man.

The launch game turns them into disposable heroes.  Let that sink in for a minute.

One of the main sources of traffic in the frequent launch game is affiliate traffic.

Email traffic and affiliate traffic.  Two of the warmest forms of traffic you can get.

But let me be clear…

That element of unpredictability is like a shaky leg on a 3 legged table.  It’s hard to get to the next level and maintain that level with a shaky leg.

Since I started launching products, I have had my fair share of wins, and losses.  At the same time, I have promoted many others product vendors as an affiliate.

As a product vendor who is also an affiliate (there are many of us) though,  you cannot promote everyone who has promoted for you.

It is a paradox.

Paradoxes do not exist for long.  The universe tends to correct them.

Some people thrive on chaos.  They do not simply exist in the uncertainty of the storm, they grow stronger from it, seek to recreate it whenever possible.

I am not one of those people.

I find ways to survive storms, but I prefer dependable processes and working with people I like.

I have no love for shark infested waters.

If I were a fighter I would probably be the guy who keeps going back to the blood sport because he is good at it and that’s how he feeds his family.

But as I spend my time in my own proverbial, “Fortress of Solitude” I come to one simple conclusion…

I must replace the shaky leg of this 3 legged table.  There is no other course of action. This is the only path for me.

People keep asking me when I might launch again.

What would Superman do?

He would fix the problem.

Sounds easy to talk about it.  It would be easy if I were Superman.

The goal is legacy.  Not just “good for now.”

I always try to move with vision for the future.

To reach the next level and maintain that place, I feel the perceived value of Epic Conversions products must become less disposable and the traffic must become more reliable.

This is what I have been working on this last month or so since the Talk Show Empire launch.

I believe the future of my business is in products that have longer shelf lives and are maintained as legacy products.

I believe that influencer traffic (affiliate traffic) is too unreliable to be used regularly.  It must be replaced with something more controllable.

This is a “think out loud” kind of post.  If it helps you with your business, let me know.  I love to hear how others are thinking as entrepreneurs!

Kam (aka Zerofatz hailing from the proverbial F of S)