Posted by KamFatz Posted on February 20, 2018 3 Comments on ANATOMY OF A FAILED PRODUCT LAUNCH AND HOW TO FIX IT IN 12 PARTS
Posted in Audience Building, More Customers, Motivational Tagged audience building, case study, how to be a successful entrepreneur, how to be more successful online, how to succeed in marketing, product launching, social influencer 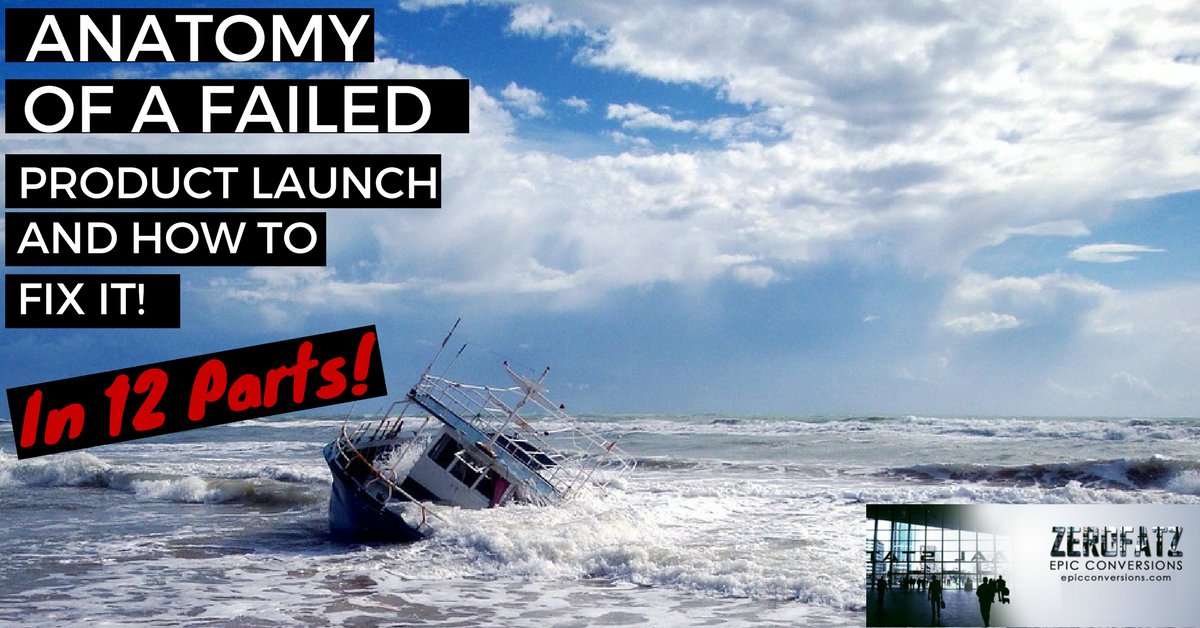 I want to take you behind the scenes of my most recent product launch, Talk Show Empire.  I admit to struggling to put this post out.  It requires me to humble myself.  But I do so in the spirit of helping others succeed.

At the end of the day, it’s not about me and it never was.  It’s always been about you.

PART ONE – THE SET UP

It’s Official…my most recent product release, Talk Show Empire was a commercial failure, selling a whopping 49 units and generating a staggering $500.89 in revenue.

That’s quite a change from the product I launched just 6 weeks earlier which sold 425 units and generated a healthy $6,471.44 in revenue…

It’s been years since I launched a product that didn’t generate at least 4 figures.   And I’ve NEVER pulled one off the market early before SO what in the actual fuck happened here?

Well, I examine every single one of these launches after they are over and this one is no different in that regard.

It is different in a few other ways though, and like the 2017 Cleveland Browns, who put me through watching a miserable 0-16 season…

…Let’s look at what went wrong and how I could have fixed it.

The jump start traffic strategy for Talk Show Empire was meant to be my email list.  It is the core of my audience.

I didn’t notify them about Talk Show Empire until the minute it launched.

Not really a recipe for a solid jump start of a product release.

I should have put together at minimum a pre-launch email talking about the concepts in Talk Show Empire so that they were at least somewhat ready.

Ideally, I should have put together a 3 email sequence getting them interested in the product.

I spent exactly 2 and a half days on JV recruitment.  That’s pretty stupid considering that affiliate traffic was meant to be a core traffic strategy for this launch and it’s my second warmest traffic source.

I should have spent no less than 5 to 7 days on affiliate recruitment bare minimum and ideally, more like 2 weeks.

I’ve been joking with Jimmy Kim (a millionaire marketer) about promoting my stuff for the last 3 launches.  This time he actually got back with me.  He even gave me an email to send future promotions to.

I was so caught up with the cleverness of my joke that I didn’t bother to take him seriously.

I’m running a business here, not a comedy show.  Arrogance is not my friend, and nothing I did in that situation helped me.

My blog Epic Conversions is the face of my business.  I ignored it during this product launch.  I don’t get many conversions on sales from my blog so I put it on the back burner.

That was a mistake.

The blog is the face of my business and it gets a lot of traffic.  Posting about the launch on my blog was essential to the pre-launch phase.

The face of my business should have been talking about a new addition to the Epic Conversion family of products.

I have a youtube channel with 15,968 subscribers.  They all care about making money online.  I failed to post any videos about Talk Show Empire.

Not a review, not a walk through of the download page, nothing.

While it’s true that many of my financial conversions come from email and not youtube, getting a message out to people requires multiple follow ups.

Getting that message out to my audience on all channels available to me was essential for maximum success.

Ignoring such a large group of people was not smart.

PART SIX – WHO THE HELL IS THIS FOR ANYWAY?

I put out a product called Talk Show Empire starring Kam Jennings.  The cover modeled the logo of one of the most successful talk shows on the planet, The Tonight Show starring Jimmy Fallon.

The concepts of this product are great, but my marketing failed to address the real elephant in the room.  Most of my audience are afraid to even be on camera, let alone actually do an interview with someone.

Modelling my logo after that talk show only really drove it home that they didn’t feel like they would be able to do it.  Not only that, but it probably felt like a lot of work to them.

Whenever you are focusing on yourself you are destined to lose.  It’s a shame, sometimes we don’t see it.

I was completely ignoring my customer avatar on this one and I paid for it.

PART SEVEN – WAKE UP NEO, THE MATRIX HAS YOU

Facebook is an amazing tool for networking.  Pretty much everybody is there and a lot of business gets done on that platform.

All your customers as well as your peers are there and most of the things being published on your timeline is gossip, jokes and irrelevant questions that really do not matter.

Combine that with the fact that facebook has gone out of it’s way to produce a skinner’s box effect on all of its subscribers and you really have a perfect storm for a lack of productivity.

I scheduled my launch to drop on the same day as two giant marketers in the WarriorPlus space.  Not one but two of them teaming up together to hold a death grip on the number one spot on WarriorPlus all week.

Two major marketers teaming up on one platform…it is obvious that they are going to control the affiliate market.

Why would I ignore that?

One of my main traffic strategies for this launch was affiliate traffic…and I ignore the fact that I was launching on the same day that these two giants are going to control the affiliate market?

That was foolish.  It was very arrogant of me.

PART 9 – SO WHY DID THIS HAPPEN?  I THOUGHT YOU WERE GOOD AT THIS STUFF?

So you might be thinking, “So if you know all this stuff Kam then why the hell did you do it?”

Well I am pretty good at this stuff.  Unfortunately, I am also human.  I am susceptible to over-confidence and arrogance.

I don’t know that you can win in this space without being a little over confident in yourself.  I don’t think I could, I would be second guessing myself too much.

I knew all the things above, and yet I felt as though I could succeed anyway, regardless of those facts.

Almost like the more the odds were stacked against me, the more of a challenge it would be to win.

“Hey I’m so damn good at this I can win no matter what the handicap.”

The truth is I ignored almost every ounce of risk management that I put in place for my product launches.

And it cost me.

PART 10 – COULD THE LAUNCH HAVE BEEN TURNED AROUND?

Now, could I have won?

Could I have salvaged the launch?

I knew just how to do it.

I almost did do it, I started to do it.

I saw the numbers were wrong on day 1, and I took action, strategizing what day 2 through 4 would look like.

On day 2 I installed a new sales page that was more customer friendly.  I also installed the first killer launch week bonus.

It was a bonus that was worth the price of the Front End product alone.

When I woke up on the morning of day three my conversions were at 25% and I was back in the top 10 on WarriorPlus.

I felt that if I continued my strategy I would have driven the product to the 5 spot on WarriorPlus.

A better sales page and bonuses that were just TOO good to say no to.

Essentially, make them an offer they can’t refuse.

But instead of that, I woke up on the morning of Day 3 and pulled the product off the market.

Why did I pull the plug?

Essentially, I got over myself.  I’m 41 years old and my life doesn’t need to be that competitive.

The launch game is a competitive place, and just because I know how to “win, regardless of circumstances” doesn’t mean that I need to do it, or that I should do it.

Talk Show Empire is a great product, but my marketing was way off and frankly, so was my demographic.

I could have salvaged the launch with insane bonuses that were too good to pass up, but in a way I felt like that would have been disrespecting the original product.

…and on top of that…

…sometimes, I think you need to just take it when you mess up.

I messed it up.  I needed to own that and take it.

The truth is I have set up my business not to be reliant on product launching.

2018 was supposed to be a year that I curved back my launching considerably and focused on putting out fresh products to my Insider’s Club.

What good is a plan that you fail to execute?

I will be back with another product launch, but it will be a while and it will done the right way.

The launch game is a competitive place and that competition can be a toxic environment.

Moving forward, I want to focus more on the free line and the content I am putting out there to Epic Conversion’s audience.  I want to update my lead magnets and explore new avenues of high quality list building.

At the end of the day, the business we build is exactly what we make it.

You have to draw your own lines in the sand for what is acceptable business practices and what is not.

So ultimately, you must take your stand.  You’ll either stand for something or you’ll fall for anything.   And you will know you are falling by the ride getting bumpy as hell.

My name is Kam Jennings, some people call me ZeroFatz, and that is all I got!