Posted by KamFatz Posted on December 9, 2017 2 Comments on 5 Things That Happened When I Slowed the Entire World Down Single-Handedly for 24 Hours!
Posted in Motivational Tagged #inspiration, #inspirational, #motivation, motivational 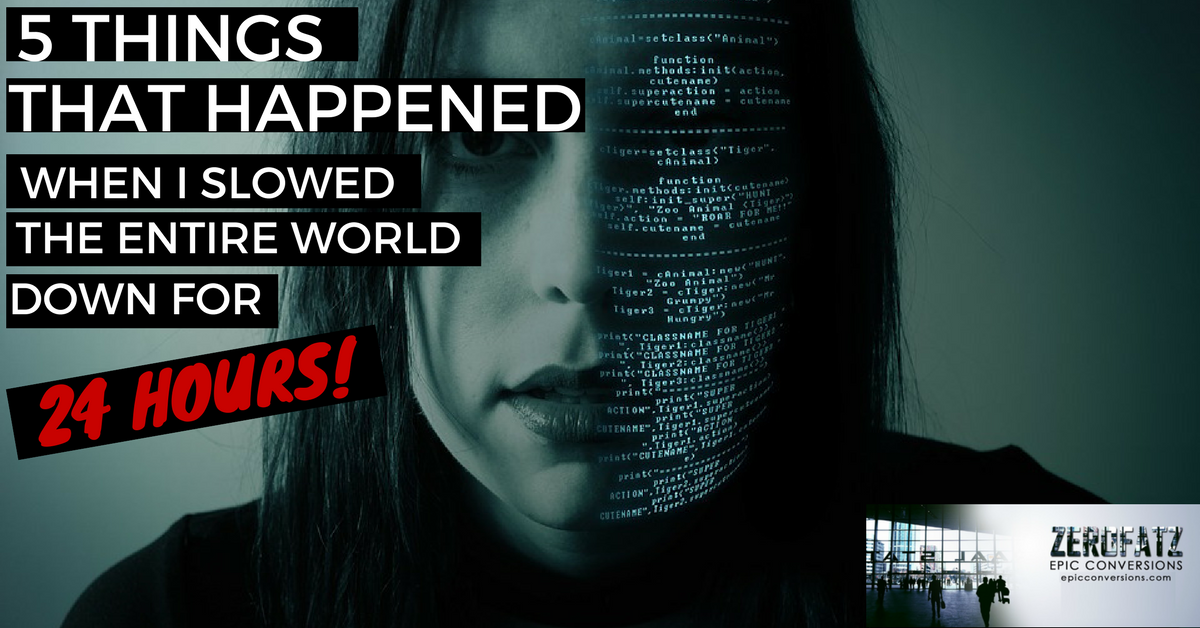 Have you ever painted yourself into a corner?

I have.  Literally and figuratively.

Not long ago I found myself painted into a pretty interesting corner.

You see, I make my living on the internet, and that is incredibly liberating because I set my own schedule, call my own shots, and just generally do all the things a boss does.

It’s good to be the boss.

So good that you might overlook a couple little details.  Details like spending more time staring at a computer screen than walking around in the real world.

Who ever set out to build an entrepreneurial empire and imagined themselves staring at a screen all day like some mindless robot drone?

Not me man.  That’s not my idea of a good time.

And yet…it was my reality.

I would be on the desktop…

I would be on the laptop…

Checking emails on the tablet…

Watching videos on the mobile…

…then for fun?  You guessed it…xbox and netflix with a side of Hulu for good measure.

I started doing the math and I realized that I was literally spending more time staring at screens than actually looking at the REAL world.

It was kind of terrifying.  It’s not just me either.

I was reading an article last year that said people are now spending an average of 8 hours and 41 minutes on electronic devices.

Basically we are getting to a place where we are just always connected.

It seemed somehow wrong to me to always be “connected.”

It has a sinister feel to it, like that movie “Needful Things” where the old guy in the Boutique is giving people all these cool items that help them…

…but really he’s the devil and everyone who gets one of those items is F*CKED!

Yeah, maybe I watch too many movies but that’s the kind of feel it has to me when you say people are spending more time staring at screens than doing anything in the real world.

I had an idea.

I wanted to know something.

What would I do if I didn’t spend ANY time online staring at screens?

How would I spend my day?

What would I think about?

Would I be productive?

How would I entertain myself?

What would my life look like if I took things back to 1995 for a day?

Challenging I know, since the internet is actually my job…but I never backed away from a challenge before.

So I decided I would spend 24 hours straight “off the grid” so to speak.

Nothing that involved me staring at a “black mirror.”

I thought that it would be a day filled with anxiety, fidgeting and boredom but what ended up happening to me was actually so eye opening that I have decided to go off the grid like this for 24 hours…

Here are 5 of my takeaways from disconnecting for 24 hours straight:

ONE – The world slowed down

One of the first things I did that morning was buy a newspaper because I figured I’d need something to do.

What I noticed was that I casually spent the entire day coming back to various parts of the paper and taking in the news.  I felt like I was controlling the narrative of my life a little bit more.

I wasn’t just being blasted with a steady stream of new content.  I picked that paper up and put it down as I went about my day.  It was nice and it felt like the world had slowed down.

One thing that bugs me about the world today is how fast everything  appears to move.  News and information zip along at a blindingly fast pace.

I truly do not think we as a society even have time to process most of it anymore before we are bombarded with the next thing.

I didn’t just skim.  I must have bought a newspaper no less than 5 times in the last 5 months and never even got past the front page.

This day was different.

This time I was actually enjoying the ritual of reading the newspaper.  And when my kids got home I gave them the comics section.  It was a good feeling.

As the morning turned into the afternoon I was thinking more decisive than normal.  Decisions were coming a little easier.  Things didn’t seem quite so jumbled.

I noticed that the majority of the articles in the paper were negative in nature or presented problems.  Everything except the ads…

…they were pretty positive.

I saw an ad that took up a whole page that was done like it was supposed to be an article.  It was cool because it was a hero’s journey style sales copy.  It had pictures and testimonials and the pitch was at the bottom.

It made me smile because it was well done and I thought it was cool.  It was the most positive thing in that whole paper.

I know because I counted all the articles and kept score of the negatives, the positives, and the ones that presented problems to you (I.E. The homeless problem downtown is at an all-time high and the temperatures are dropping for the winter.)

The only positives in that whole paper was the sales copy of ads.

What do you think the meaning of that is?

I don’t think I would have had the focus to mess with it or even notice it in my normal life.  Let alone fathom what it meant.

As my focus improved I started remembering things that I wanted to get done that had been put off for months because I just felt there wasn’t enough time.

The internet makes you feel that way.

It was an illusion.

I had the time.

…I got some doorstops mounted that I had bought last month…

…and a book called, “How to Rig an Election: Confessions of a Republican Operative” that had been sitting on my bedside table for 5 months…

…I finally started reading it.

I had felt like I just didn’t have the time.  That book had sat right next to my tablet for months which I always had time to pick up every single night.

I read 150 pages of that 256 page book.  It has been a long time since I read that much of any one thing.  A renewed sense of focus I guess you could say.

The book was absolutely fantastic and eye opening.

I noticed that when I slowed the world down, ideas started coming to me.  Ideas for products, for blog posts, for youtube videos.

I started the day with a blank composition notebook for any ideas that might come to me.  In the morning I remember staring at it with a pen and just thinking…God…I have nothing to say.

So I gave up and started reading the paper.  As the day went on though I started coming back to that little composition notebook and sketching out concepts for products.  Notes for blog posts.  Even ideas I had for songs.

I’m a musician but I haven’t written any new songs for years now or even played my guitar for months.

This article you are reading now was actually something I thought up that day when I didn’t “connect.”

It felt like as I disconnected from “devices” I began to reconnect to self.

SO WHAT THE HELL IS THE POINT?

Here is what I believe.

I do not think the internet is a bad thing.  I like the internet.  It changed my life for the better.

But I think that sometimes something so interesting comes along that if you are not careful you can get lost inside it.

The idea of having the world’s knowledge at your fingertips is one such thing.

A place where you can learn about anything, get instant validation and feedback for any ideas you might have, hear any song, watch any movie…

It reminds me of when Friedrich W. Nietzsche said, “”He who fights with monsters should be careful lest he thereby become a monster. And if thou gaze long into an abyss, the abyss will also gaze into thee.”

I will take 24 hours off every week from now on to reconnect with reality a little bit.  I think it’s important.

How has the internet changed the way you live your life?

What the hell did Friedrich W. Nietzsche mean when he started talking about monsters and abysses?

2 thoughts on “5 Things That Happened When I Slowed the Entire World Down Single-Handedly for 24 Hours!”