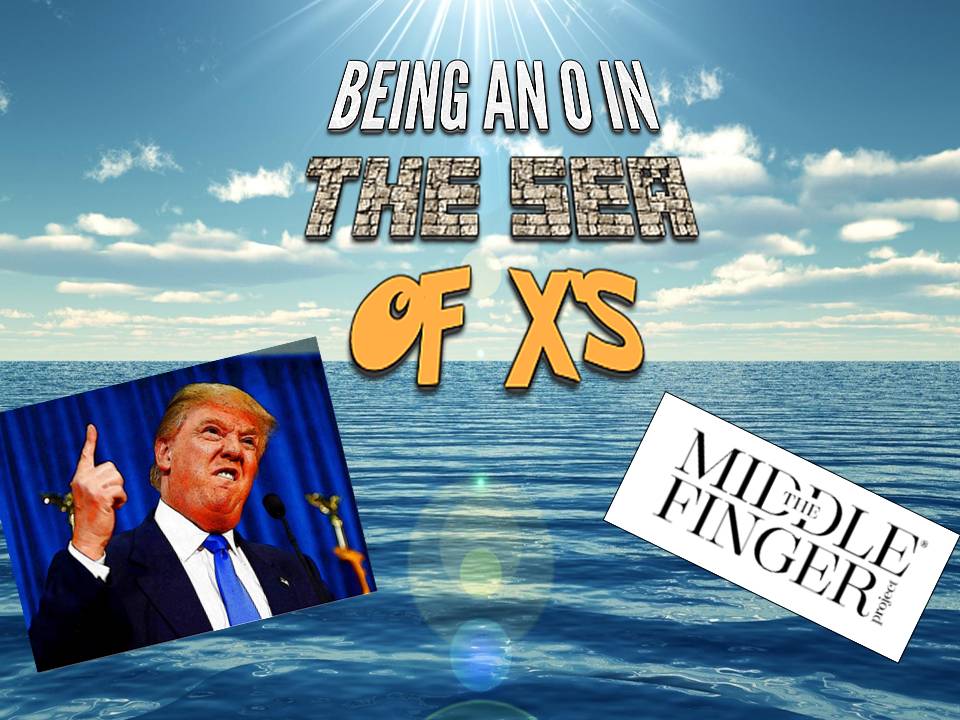 Thoughts on Donald Trump, Creating Separation and the Sea of X’s

Donald Trump is outspoken, arrogant, audacious, and at time he’s kind of a fool.  However he is unlike any of the other candidates running for office in recent history.  He has created a separation that distinctly gives him an advantage.

Many times during an election year you will hear a group of people say they don’t know who to vote for, they are all the same.  Nothing is going to change anyway.  They are not passionate about any candidate truly.

Donald Trump is NOT the same.  Nobody sees him as the same as Hillary Clinton or any other candidates.  Love him or hate him, people HAVE an opinion about him.  He has created separation. 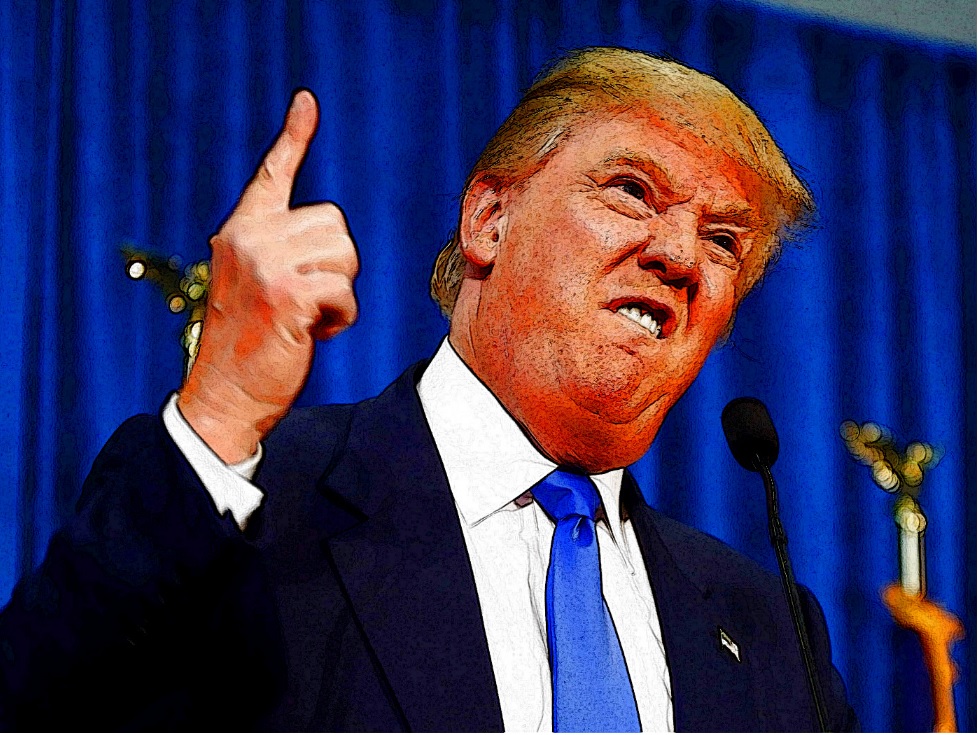 How about something more relatable to what we do though.

Consider Ash Ambirge’s The Middle Finger Project.  She is a confident and sometimes outlandish advocate of fearless writing.  Ash is not afraid to throw caution to the wind and write from the gut. 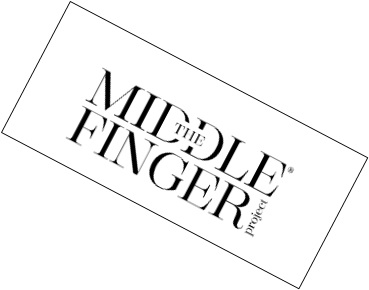 She puts content first, over sales, and in doing so has created a loyal fan base that sees it as not just a blog, but a state of mind, a way of doing things, a lifestyle.

She has created separation for herself and her company.

You could argue that that Donald Trump and Ash Ambirge are O’s in a sea of X’s.

In the world of online marketing, creating separation is huge, especially when you are first getting started.

Want to make money online as an affiliate marketer?  Great…that’s you and thousands of other people.

Want to quit your job and work from home, sending out a few emails a day and just kicking back?  Same thing…millions of people just like you, fantasize about that life.

And what does everyone do to learn these skills?

Well…a lot of them brilliantly succeed at doing nothing.  So that eliminates some of your competition.

But what about the ones who take a shot?

They all go learn the same stuff from the same experts.

If you have a thousand people who all learned that the best way to sell lemonade is to set up a brown lemonade stand with a green sign on the corner of your street, what do you have now?

You have a WHOLE BUNCH of brown lemonade stands with green signs on a bunch of corners selling lemonade. 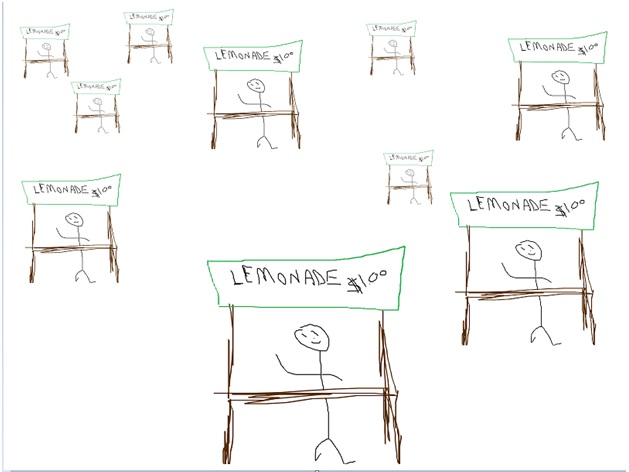 They are all going to start looking the same.

Then let’s say you have one guy, let’s call him Joe, who says, “hmmm I acknowledge that a brown lemonade stand and a green sign set up on the corner is the best way to sell lemonade…

SO Joe figures out that the colors brown and green triggered an emotional response in people who are thirsty (I’m completely making that up btw).

He also figured out that most people stop at corners, making it statistically more likely that they might buy lemonade.

Alright that’s great but the problem is…this place is saturated with brown lemonade stands with green signs and every corner is taken.

It’s like a piece of paper with a bunch of x’s on it.

Well…now Joe starts thinking about things.  He says, “you know what…I’m going to have a GREEN Lemonade Stand with a BROWN sign.

I’m respecting the science of it that way and also I am not just another X.”

In this way Joe creates a degree of separation for himself.  He stands out while still taking advantage of the colors.  Joe wanted to be the O in a sea of X’s. 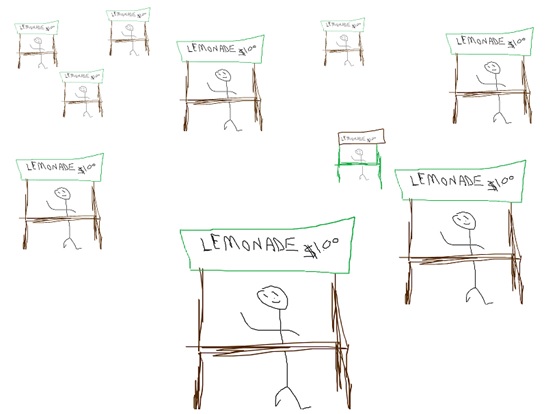 Things are no different for you when you are entering a market that has a lot of competition like internet marketing or its many sub-niches.

Like Donald Trump or The Middle Finger Project, you need to find your way to stand out in a room full of people trying to attain the same goal as you.

Will it always be as simple as flipping the colors around on your lemonade stand?

However, you have to see that there are a lot of people doing the exact same thing in the world of IM.  You also must have noticed if you have been here for any length of time that it is a very monkey driven industry.

One person does something and sees success, all of the sudden a thousand other marketers are doing the same thing.

How can you understand the science of why something works like Joe did and turn yourself into an O?

That is the question you will have to ask yourself over and over as someone who wants to be successful online.

You might be thinking right about now, “Sure, easier said than done.  Sounds a lot like USP.  How the hell am I supposed to find this mythical UNIQUE SELLING PROPOSITION crap?”

EVERYTHING HAS BEEN DONE BEFORE!

Everything has not been done before.

You have not been done before.

The easiest way to begin to create separation from others is by just being yourself.

You would be surprised by how hard that can actually be for people.  I mean, sure it’s easy when you are with your friends or family…but its different when you are around a bunch of people you don’t know.

You want them to see you as someone who can help them.  You want to become the expert, the person who your potential customers are not afraid to spend money with.

So now it kind of becomes this thing where you don’t want to look stupid.  You start trying to see what other people are doing who are perceived to be successful in the space and copying them.

Sounded reasonable when they said it right?  Let’s just play it safe and regurgitate the same stuff…right?

This isn’t a safe game.

Playing it safe get’s you ignored pretty fast around here.

You need that separation.  You need to stand out.

Ironic that the best way to do that is to follow advice that you have been given, probably since Kindergarten… 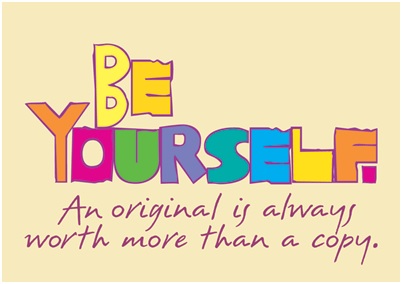 Come to think of it…maybe that’s why cliché statements like that have lasted so long.  They’re true.

Anyways, that’s all I’ve got!

Get out there and do something that is interesting to you, in your own style, while at the same time observing and respecting the science of why things work.